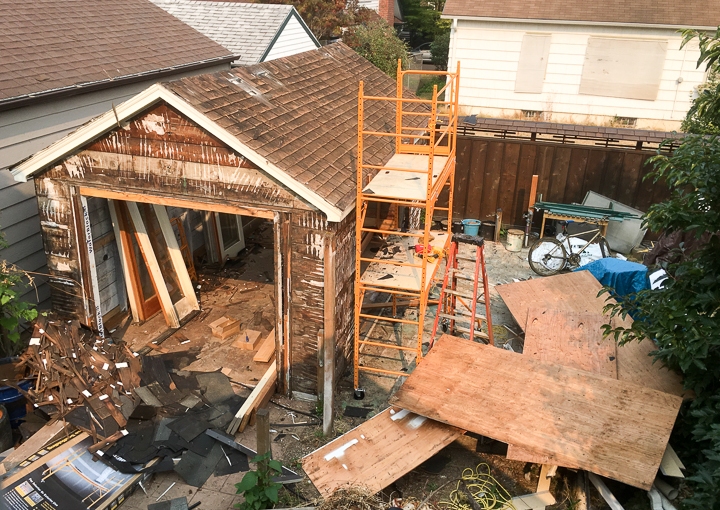 Problems with the Concrete Slab

The existing garage slab was in poor condition: cracked, uneven, and built below grade which resulted in continual water penetration through the mudsill. There was dry rot through much of the mullsill and some studs. I needed to pour a new slab.

One option was to pour a new slab on top of the old although this was not a good foundation for a structure built to the latest building standards and intended to last decades.

So my architect sought and got approval from the City/Irvington Historic Committee to lift or move the garage, demolish the old slab, and pour a new one. Demolishing and rebuilding was not possible as the garage was listed as a historic contributing structure. Instead the building needed to be moved intact, the new slab poured, and the building shifted back onto the new slab.

Getting ready for the move

I stripped back the structure to make it as light as possible for moving, while also removing anything that would not be a part of the final structure. 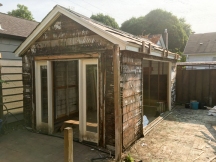 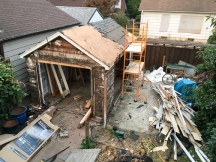 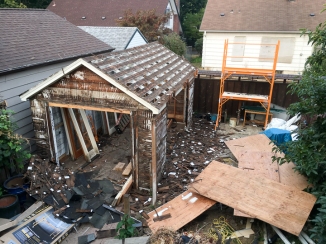 I purchased a two level scaffold from Home Depot for the roof work: 2-Story Rolling Scaffold Tower. I’ll make good use of this during construction and also when I eventually re-roof the main house.

I also bought some 8×8 beams and 12×2 and 10×2 ledger boards from the Re-Building Center for jacking up the garage.

I wasn’t hopeful of finding a builder to take on this project given the building boom in Portland. Instead I expected to work through the garage move and slab work myself.

My architect had suggested JRA Construction however they were too busy to schedule my project. However they referred me to Josh O’Duin who was interested and I signed a contract for construction through to the framing/sheathing stage.

I got lucky there as I would have struggled with the move and slab work. Josh came up with the idea of shifting the garage sideways onto an adjacent concrete pad instead of jacking it up and then having to work underneath the structure.

Josh and his co-worker Tanner spent a couple of days bracing the structure: 12×2 ledgers along the long walls and 10×2 ledgers on the short walls bolted into each stud. Then lots of 2x4s to further brace the walls.

The move only took 26 minutes. It rolled well on the 1″ cast iron pins placed under the beams and using a cherry tree as a winch point.

It was now ready for the sewer, water, electric trenching and rough-ins and slab work.

I grew up on a hill country farm in New Zealand, then lived and worked in Hong Kong. I moved to Portland, Oregon in 2009. I'm presently renovating my 1929 "English Cottage" house in the Irvington Historic District. View all posts by Bill Dickens